Summer in the south 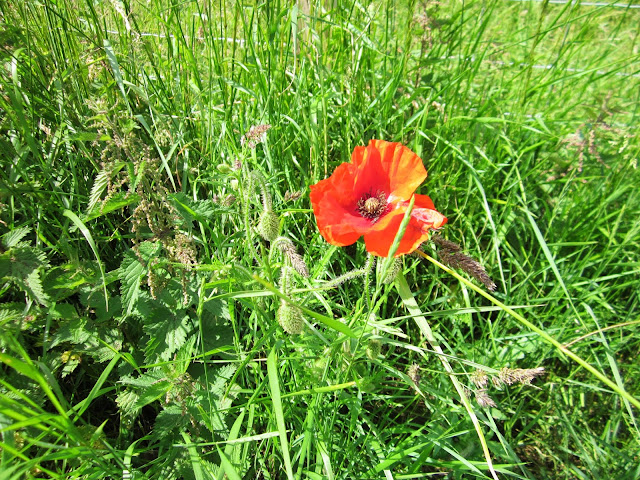 We have received an amazing portfolio of beautiful photographs from Micky.  I have dipped into the collection and have chosen summer photos taken between May and the end of July.  These have been taken right down at the southern end of the Vanguard Way.

You will see that Micky's photos mirror the changes we have already been shown in other parts of the route. The landscape here is quite unique on the Vanguard Way and, judging from Micky's photos, so are the skies.

For this post I have assembled some collages where photos are roughly grouped together according to month or location. You can click on them to enlarge them (press your 'esc' button to come back to the blog post). Please take a look and if you would like to see all of this selection of Micky's photos, please click on the final smaller square which is a web album cover.  This will take you to the web album and you can select 'slide show' to view them all, along with their captions. 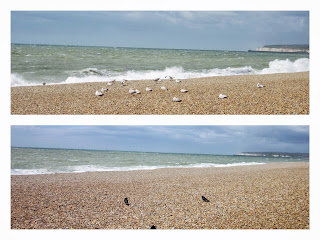 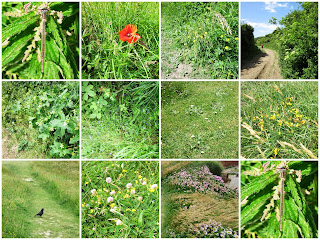 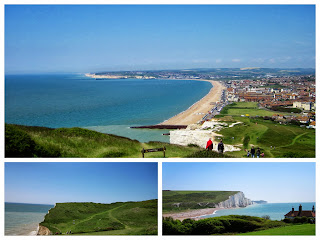 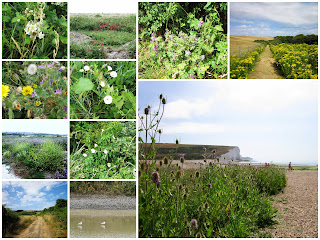 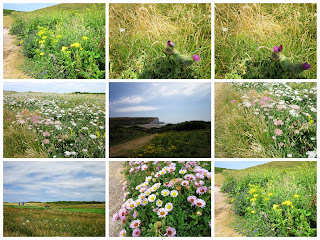 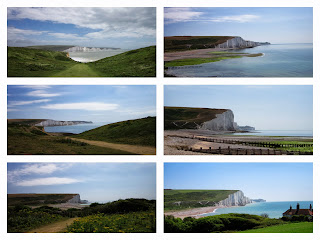 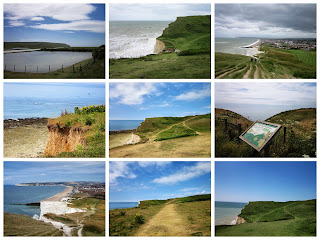 Below is the Picasa web album, if you would like to look at the photos and their captions one by one, click on the photo and then click on 'slide show'. Should you arrive in Google + photos, click on the label saying 'go back to Picasa' so that you can run the slide show.


Our heat wave has ended, at least for now, and people have been out on the Vanguard Way, and its links, enjoying the flora, fauna and some misty views.

It is interesting to note a repeat mention of the Cinnabar moth/caterpillar.  Ragwort, though a bright and beautiful yellow daisy flower, is a 'notifiable' weed ;  this is because eating it causes liver damage and it is a particular problem for horses and cloven hoof animals farmed for meat. Strictly speaking landowners should ensure that Ragwort is removed from their ground, especially if horses or cattle graze nearby.

Alan and Veronica have been out on the Oxted and Westerham sections and have sent in the following report:

Wildlife sightings
1         At GR 385542 on the western link from Oxted Station saw a cinnabar caterpillar on ragwort.  This is a caterpillar contains poison as its yellow and black bands warns. The cinnabar moth is red and gray.
I took a picture of the caterpillar but it is very small so may not be clear. (You can click on the photo to see an enlargement) 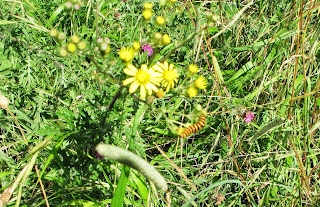 2          From the field in 2.11 c), we saw a buzzard.
3         In the field with the missing waymark posts in b) and c) of the link to The Grasshopper Inn we saw      another large raptor.  It was dark blue/black in colour.  We couldn’t immediately identify.  It was similar in size to the buzzard (length of body and wingspan) but it was slimmer and sleek (no ragged edges on the wingspan).  On consulting my bird guides it seems that it was a Peregrine Falcon (in fact a drawing in one of my guides looks exactly like it).  The bird was calling as it flew and the sound of a peregrine on my CD of birdsong was, as far as I can recall, the same.  We only saw the bird for a short time before it flew out of site behind some woods and, unfortunately, I didn’t have my binoculars handy.

I am particularly excited by the presence of buzzards and peregrine falcons in my area!

Angela and Brian have been out further south on the Poundgate to Buxted section.

Teasels seem to be having a good year in 2013.  From a wildlife point of view they are definitely desirable. We have lots of them in our Oxted garden and the bumble bees are loving them at the moment whilst they are in flower.  If you look closely at the upright stalk of a teasel plant, you will find the side stalks join it with a wraparound feature that collects water when it rains.  These little reservoirs provide water for small birds and other creatures.  During the winter the familiar dry seed heads of teasels attract birds, especially bullfinches.

Well not what you’d expect in late July, but it certainly felt autumnal when we set out to check the VGW between Poundgate and Buxted (including a long but well-signed diversion brought about by a bank collapse – see www.vanguard.org.uk for details).

It wasn’t a day for spotting fauna as the clouds were sitting low on the hills and the surrounding countryside. The birds, butterflies and other animals were in hiding.  We could just see the length of one field as we set off from the Crow and Gate PH at Poundgate.  Very atmospheric.

However, there was an abundance of Flora.  The hazelnuts, beech nuts and sycamore seeds reminded us that autumn is not too far off, as did the bramble flowers which will hopefully turn into luscious blackberries.  Spotted in the hedgerows were angelica and honeysuckle.  Quite widely spread was Himalayan balsam, an invasive species, which usually grows along streams.  However this was growing in the hedgerow along the road to Hurstwood without any apparent water source and in various farmyards and woods along the way.  Looking over a hedge we spotted a small vineyard.

One of the fields along the route was planted with flax, with its pretty blue flowers, but past their best.  Also along the edge of this field were various thistles, mallow,  vetch and burdock.  Getting nearer to Buxted we passed near a pond with large patches of teasels and ragwort growing nearby.  Luckily there were no horses or cows in this field as ragwort is poisonous to both of them.  Just as we emerged on to the road to Buxted I spotted a lovely specimen of bracket fungus growing on someone’s wooden steps.

Not wild but looking very pretty were daylilies and waterlilies in a pond along Church Lane in Buxted when we were checking one of the links from the VGW to Buxted Station.

As the clouds lifted in the afternoon we did spot a white butterfly and a little orange moth.  The white butterfly was hanging on for dear life as the wind was trying to blow it off its perch.  The little orange moth was on a yellow daisy.  There were cows and sheep in the fields and, if only the sun had been out, the long grass in some of the fields would have been multi-coloured.  And we did see fallow deer from the train when we were on our way home.


Photos are indicated by words in bold italics, please click on the video below to see a slide show of our photos.

I'm sorry, I'm having technical problems with this video!  It should open from the blog post but isn't cooperating 100% of the time yet.  Instead, click on the purple one and click again when it opens in the web album.  I need one of those roadworks icons, hope to get it working properly soon!

Many thanks to our contributors for this post.  Do check back shortly as I have also received a lot of photos for the most southern section thanks to Micky.
﻿
﻿
Posted by Pam Van at 12:29 No comments: