We have received some interesting photos from Colin Saunders (author of many a route description).  All of these photos are 'copyright C Saunders' and any of them can be enlarged by 'clicking' (ESC key to get back). Colin's captions are in brown. 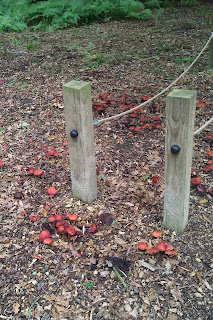 Mushrooms or toadstools?  Seen on the Vanguard Way link with Lingfield Station, beside part of a keep-fit course in woodland belonging to the National Centre for Young People with Epilepsy.

Having done a bit of enlarging here, these toadstools could be of the Russula emitica family.  Common name 'sickener' because, although not poisonous it does cause vomiting.  Said to be common in coniferous woods in late summer and autumn.  Now a couple of weeks on from Colin's photos, toadstools are popping up everywhere!  Our neighbour has some fine examples of fly agaric with its characteristic red cap with white spots. 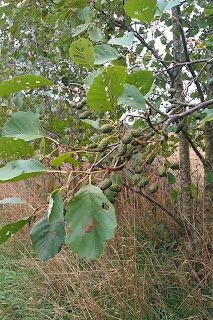 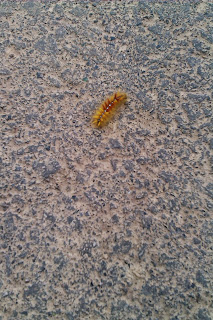 Sycamore moth caterpillar (Acronicta aceris).  Seen on the drive to Starborough Farm on the Vanguard Way link with Lingfield Station.  According to the caterpillar identification chart on  the internet  ‘These striking caterpillars are mildly poisonous, they don’t have sharp spines and can be handled, but repeated handling increases the poison dose and can eventually cause mild effects.’ 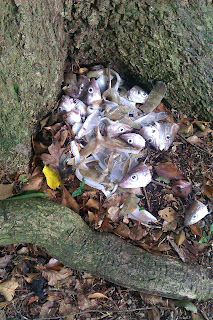 Fishheads deposited at the foot of a tree in woodland near Greybury Lane on the Vanguard Way link with the Wheatsheaf pub at Marsh Green.  One assumes that they have been put there for the benefit of foxes etc. 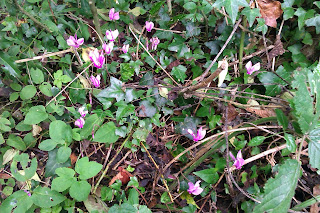 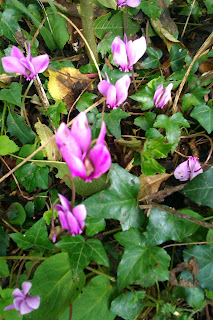 Orchids?
These are cyclamen.  Perhaps escapees from a garden though, although in general these plants are from Central and Southern Europe, 'sowbread' (named because pigs like to eat the bulbs) Cyclamen hederifolium is possibly native in woods in S E England.  The RHS has further information on http://apps.rhs.org.uk/plantselector/plant?plantid=610 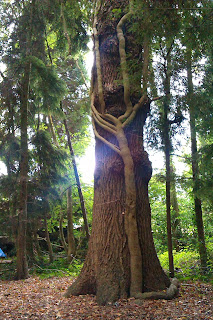 I think this duplicates photos already submitted by Michael Hartley (‘young monkey clinging to its mother’).


Earlier in the year Colin also sent in the following photos of 'unusual' fauna. 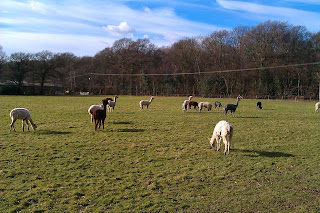 
This herd (flock?) of alpaca was grazing a field at Graywood on 7 February 2013. 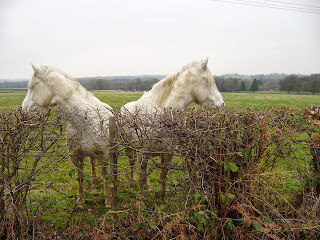 PushmiPullyuHorses
Dr Dolittle’s pushmi-pullyu was supposed to be a sort of llama, but these horses (in a field south of Blackboys) are doing a good impression

For those out of touch with Dr Dolittle stories/films, Wikipedia has this to say about a PushmiPullyu:

"The pushmi-pullyu (pronounced "push-me—pull-you") is a "gazelle-unicorn cross" which has two heads (one of each) at opposite ends of its body. When it tries to move, both heads try to go in opposite directions. Dr. Dolittle meets it on his voyage to Africa to save monkeys (See: The Story of Doctor Dolittle). The pushmi-pullyu usually only uses one of its heads to talk, reserving the other for eating (thus allowing the pushmi-pullyu to eat while speaking without being rude) and claims to be related to almost all kinds of deer - its great-grandfather was supposedly the last unicorn. In the 1967 film, the pushmi-pullyu was instead portrayed as a double-headed llama. The Eddie Murphy film has a brief scene where it is walking in the background while Dr. Dolittle talks to the tiger in the cage. This is in keeping with the fact that Murphy's movie version was only loosely based on the books.[4]"


We are well into the autumn season now.  Hopefully you will soon be sending in typical autumnal photos and information on autumn colours, spiders webs, various fungi and the ever increasing likelihood of mud...